The Power of A Patient: Achieving Fertility Preservation Coverage for Connecticut 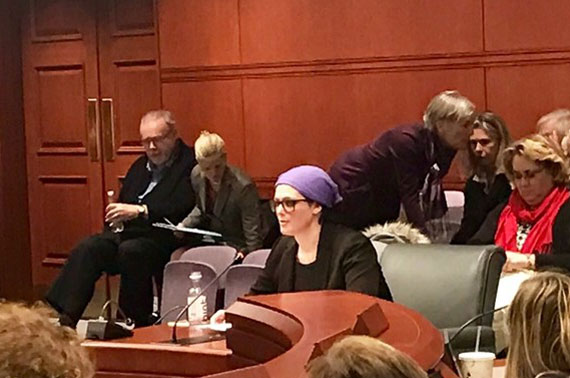 Earlier this year, Connecticut became the first state to pass legislation that guarantees insurance coverage for standard fertility preservation services. For patients who need these services due to a medical necessity – including undergoing chemotherapy or other fertility-threatening treatments – this coverage could be life-altering.

One Connecticut patient, Melissa Thompson, was the key force in getting this legislation passed. We are so pleased that she has chosen to share her story here, with the AFP community. We urge you to read her first-person account, and to be inspired!

On the 100th day of my legislative journey, I banged the gavel on the Senate floor in Hartford, Connecticut, proclaiming the bill had passed.

My first legislative experience was on February 7, 2017 – the day of the Insurance Committee public hearing on my bill – one that would require insurance coverage for fertility preservation for insureds diagnosed with cancer.

I had prepared for months – my testimony and supporting documents consisted of over eighty pages of narrative, keys studies, and fiscal analyses. Nevertheless, despite being well-researched, I knew nothing about the legislative process and it was my first time in a Capitol building. I walked in not knowing a single person, and as the only person represented by neither a lobbyist nor a legislator. My opportunity to speak came at the end of the day (by which time I was shaking like a leaf from nerves).

My bill had almost as many lives as a cat. Within the course of those hundred days, the language was amended to optimize it for bipartisan support; its number changed as we adopted the number of another bill; hundreds of hours had been spent monitoring the bill and potential opposition; and numerous solutions had been advanced to counter each round of resistance.

My goal was to get as many “no’s” as possible and then overcome them. I tried to give no one a rational, defensible reason not to support the legislation.

I am so proud of Connecticut for being a leader in Oncofertility legislation and for the bipartisan, collaborative efforts put forth by many people and agencies within the state.

This bill’s success started with a personal problem I had during fertility preservation after my cancer diagnosis – I fell into a coverage carve-out despite my insurance covering IVF and initially authorizing the treatment. My initial expectation of coverage was also emboldened by my fertility center, who knew I had marketplace insurance but assured me from the beginning my treatments would be covered. When my carrier learned I had cancer, however, that authorization was reversed.

Initially I thought that the denial of coverage must have been an error, but at the time, battling cancer was at the top of my agenda. Once I neared the end of my chemotherapy treatment I explored every possible option to rectify what seemed like an irrational mistake. Ultimately, I learned I was simply “out of luck.” This felt very wrong to me. My immediate reaction was not “how did this happen to me?”, it was, “why is this happening to us” – us being the young adult cancer community.

Until my eponymous law passed in Connecticut on June 20, 2017, no individual with marketplace insurance in any state had coverage for cryopreservation after a cancer diagnosis and before chemotherapy.**********

The work that we did in Connecticut was highly collaborative, with key stakeholders involved from the very beginning, to make sure the coverage was what the community needed.

The new law modernizes Connecticut’s definition of infertility to comply with modern medical standards and recommendations. It removes word “healthy” from the existing definition and extends coverage to any circumstance where it is deemed medically necessary. It is not a new mandate, but rather changes the existing mandate based on the updated definition.

It is amazing that by removing one word, and by adding a comma along with three additional words, will have a profound impact on hundreds of patients’ and their families’ lives. As of January 1, 2018, access to insurance coverage for fertility preserving treatments will be assured.

Ironically, Connecticut is ranked as the least legislatively efficient state in the country; #50 of 50, with 1.6% of bills passing of the over total 3,000 that are introduced annually. Hartford – the state capitol – is also the insurance capital of the U.S. Despite fighting for this legislation in a building that is literally surrounded by insurance headquarter buildings, a state whose Senate was evenly split 18-18 down party lines, we still managed to pass a wonderful piece of legislation.

I am proud of Connecticut’s elected officials for keenly listening to the voice of one person, despite heavy interests of potential opposition outside the door. I am so impressed at the transparency and collaboration the process held. Mostly, I am thrilled that in the future, people like me – the young cancer patient who hopes to have children after cancer – will not be foreclosed of her opportunities because of an unaffordable price tag. Patients can concentrate on their own health and that will not come at the cost of a long and full future.

I hope that every state can look to Connecticut’s leadership on this issue and realize that the issue might not affect a large percentage of the population, but the depth of that effect on those it does help is so profound it cannot be assigned a value.

Patient advocates like Melissa who raise their voices and share their stories are an invaluable asset to our community. Providers and policymakers will only join with us to create change if they understand this issue on a human level. Please consider explaining what parenthood after cancer and coverage for fertility treatments means to you by sharing your cancer and fertility story: https://www.allianceforfertilitypreservation.org/share-your-story. For more information about how to get involved in advocacy efforts in your state, contact us at: advocacy@allianceforfertilitypreservation.org.